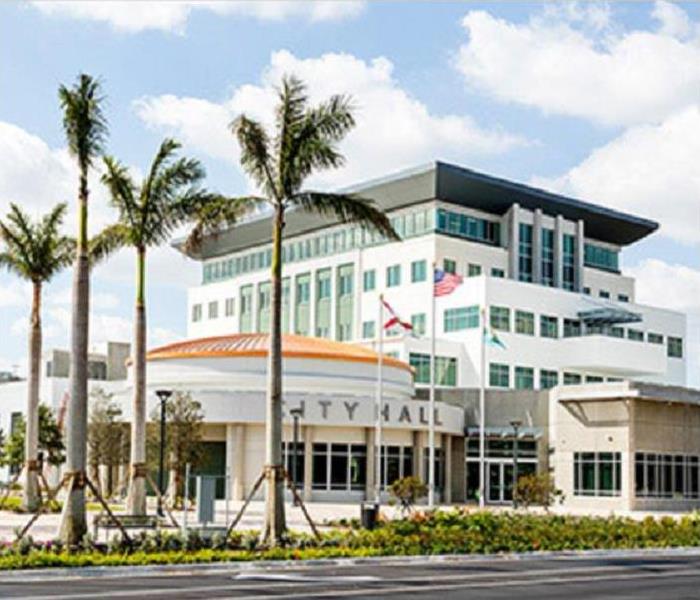 No matter if the fire occurs in your house or city hall SERVPRO is your trusted choice for fire damage restoration;

Coral Springs, Florida, is a planned community that is home to over 130,000 residents in 24 neighborhoods, with some of the most valuable real estate property in the country. The workforce is a diverse blend of blue- and white-collar. An estimated 35% of jobholders work in such sectors as office administration, management, and sales.

Coral Springs is also home to a larger proportion of computer science and mathematics professionals than most United States communities. The average post-secondary education level is high: almost 39% of adults have at least a bachelor’s degree compared against the national city average of nearly 22%. The average income for a family of four was $130,000 based on a per capita income of $32,000.

Prominent employers in the area include:

“The City in the Country” is renowned for being among the top communities in South Florida regarding education, safety, employment opportunities, and growth. It is one of the most leading examples of a thriving planned community in the United States. Young professionals who prioritize upward mobility and families alike thrive in this diverse city.

A Brief History of Coral Springs

Coral Springs sits on 2,000-acres of land purchased by Henry Lyons sometime between 1911 and 1939. However, the area suffered several significant floods in 1947, which necessitated the construction of several levees to drain the floodwaters. After a few years of bean farming, Lyons passed away, and his heirs shifted to raising cattle.

Coral Ridge Properties purchased almost 3900 acres from the Lyons family for $1 million in 1961 during a postwar South Florida real estate boom. This massive acquisition added to an already collection of land parcels in Broward County.

1963 was the year Coral Springs was chartered, and the following year, the city sold over $1.6 million worth of building lots. In 1965, Coral Ridge Properties acquired 6,000 more acres from the Lyons family. Coral Springs’ first city elections were held in 1967.

Since its founding, Coral Springs built a plethora of new structures to support the community, including the 945,000 square-foot Coral Square shopping mall, 19 public schools, and the Sawgrass Expressway 1986.

The Coral Springs Museum of Art is an additional notable development in the community’s history. It was built in 1997, next to the Coral Springs Center for the Arts erected one year prior.

The Coral Springs Parkland Fire Department (CSPFD) spans across eight stations, including three located in nearby Parkland. Before establishing the local fire protection service in 1970, Coral Springs residents relied on the Margate Fire Department. The CSPFD’s origins are humble, initially consisting of a small volunteer crew with nine firefighters on staff.

Coral Ridge Properties gifted the crew with its first fire truck. Before fire hydrants were built in town, firefighters had to draw water from local canals. In 1979 the department was hailed as one of the top volunteer firefighting companies in the United States. Their dedication to training continues to this day. The fire training involves using buildings that were already scheduled for demolition and damaged cars to recreate scenarios as close to real-life situations as possible.

Today, Coral Springs’ fire department has a paid workforce. Its training program birthed the Coral Springs Regional Institute of Public Safety (CSRIPS), the only fire academy in Florida to offer every course needed to become a firefighter in one institution. The CSPFD also has 18 members in southern Florida’s Task Force 2, which is specially trained to respond to vaious emergencies, including:

How Does SERVPRO Clean Soot in Fire-Damaged Coral Springs Homes?

SERVPRO technicians are licensed and trained to perform fire damage restoration services for Coral Springs homeowners 24 hours a day, seven days a week, including all holidays. Whether your home requires light soot cleanup after a stovetop flare-up or an electrical fire has left behind significant damage, your local SERVPRO has the means to return your home to a preloss state.

Restoration services include returning the contents of your property to the original condition when possible. Soot-affected clothing, for example, may require the following:

Time is essential when treating soot-affected clothing because the synthetic fibers that are common today are prone to binding with smoke odors and particles, which can cause permanent damage. SERVPRO also utilizes Institute of Inspection Cleaning and Restoration Certification (IICRC)-approved techniques and EPA-registered biocides to mitigate stains, odors, and microbial growth.

SERVPRO of West Coral Springs / West Parkland ensures that your home looks and feels “Like it never even happened.” Call (954) 973-4130 for a fast response to your disaster restoration needs.